The inspiration behind Barnaby

I’m part of a group of picture book authors publishing books in 2021 and I wrote on the PictureBooksEh! blog all about the inspiration behind this book. Check it out here or read more below.

What inspired you to write Barnaby?
One day I was walking my two boys to our neighbourhood school, and I saw a flash of blue from the corner of my eye. I thought I was imagining it until I realized it was a blue budgie flying around our urban schoolyard and hanging out with a bunch of chickadees and sparrows. I started to wonder how this tropical creature was handling the outside world and what he made of the other birds—and what they made of him! 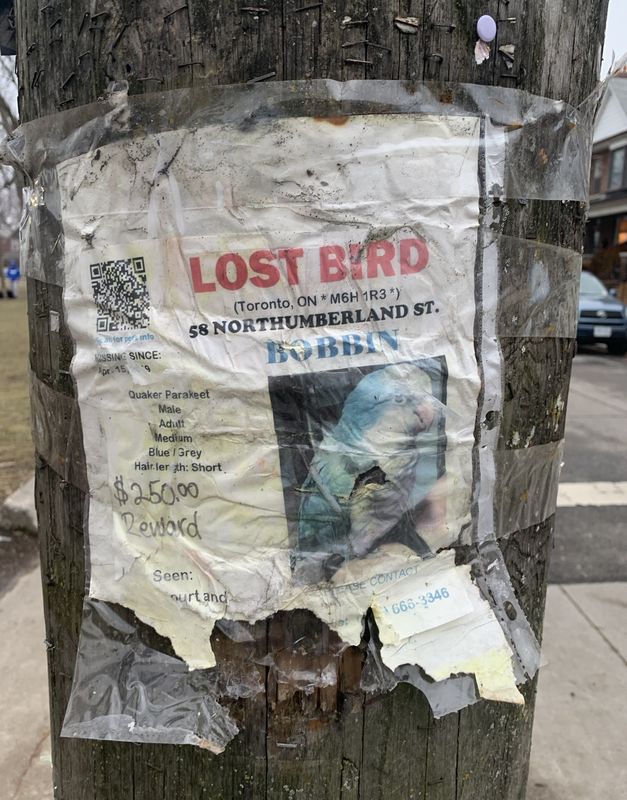 If you live in a city, you’ve probably seen posters like this heartbreaker here about Bobbin the parakeet that popped up in my neighbourhood. I sometimes think there should be a requirement that people who post missing pet signs update everyone when the creature is found. It’s almost too much to bear to not know. And, in fact, there was a recent update in The Toronto Star. Spoiler alert: Bobbin did not make it home. It’s not the ending any of us would have hoped for, but there’s a nice twist because the owner received a lot of support and love from her community.

My spotting of that blue budgie was actually quite a long time ago. I have files for Barnaby (who does make it home) on my computer dating from 2012! My kids have long since graduated from that little urban school and are now in high school and university.

But I think that’s sometimes that’s how things go with books. They may start with inspiration but take a really long time to find their proper form. They need to be imagined and reimagined. Over those years of thinking about the book, I even started doodling blue budgies and I’ve created quite a cast of them by now. Every year I make a calendar for my closest friends and family featuring a blue budgie doing all sorts of silly things (climbing mountains, skateboarding, dancing). This year my budgie is doing everything that we haven’t been able to do under lockdown: HUGGING and gathering closely with friends!

To celebrate Barnaby’s launch, illustrator Kass Reich, our publisher Owlkids and I  took over the front window of TYPE books on Queen Street in Toronto. Check out some images from this fun spring display.

← back to main page